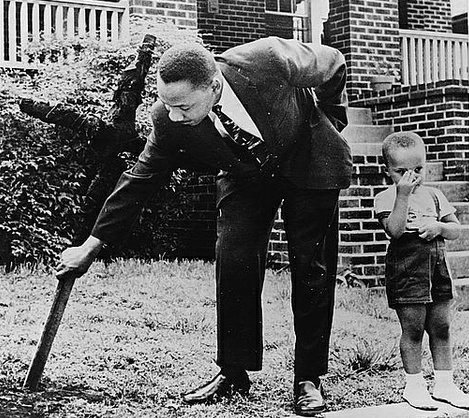 It is MLK Day, a day of remembrance for a great man and his outstanding contributions to civil rights for people of all races, religions, and lifestyles. Absolutely one of the most important people who lived in the last 100 years.

What can I say about Dr. Martin Luther King Jr that hasn’t been said before.. An imperfect man, who still managed to help pull a downtrodden segment of society out of disenfranchisement, fighting against a furious breed of racial hatred, and in doing so not only set an example for the world to aspire to, but also became a martyr for equality. This man may not have single-handedly defeated racial inequality, but he succeeded in opening many eyes to the truth of the terrible matter.

Ever since I was a kid, Martin Luther King Jr Day has been negatively referred to as a “black holiday.” Calling it that belittles the work this exceptional man did in his life. The man was a true Civil Rights leader, for everyone, regardless of race, gender, religion, or social status. He was a deeply flawed human, like the rest of us, who tried his hardest to work past that, to work past the negativity and injustice he saw in this world. We ALL should be proud of what he accomplished, what he died for trying to accomplish.

Take a certain photo for example. Dr. King removing a burnt cross from his lawn while his son stands nearby.

I’m heartbroken by the circumstances that must have led to this moment, but the look on Dr. King’s face, like he’s just simply pulling a bothersome weed. That is strength, my friends.

This is a text widget. The Text Widget allows you to add text or HTML to your sidebar. You can use a text widget to display text, links, images, HTML, or a combination of these. Edit them in the Widget section of the Customizer.